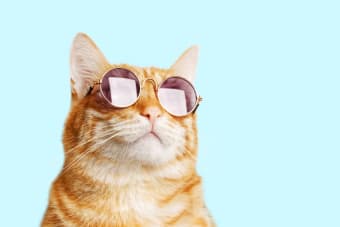 Have you noticed your cat's eyes have started to cloud over, this may be a sign that your cat is developing cataracts in its eyes? Today, our Mooresville vets will provide you with information on cataracts in cats and what to look out for.

A cataract refers to an increase in the opacity of the lens of the eye. The lens, a structure within the eye composed of protein fibers encased within a capsule, is responsible for focusing light on the retina and allowing clear vision.

When a cat starts to develop a cataract, the normally clear lens develops a cloudy or opaque appearance that interferes with the ability of light to reach the retina. Depending on how severe the cataract is, it can have significant impacts on the cat’s vision.

Cataracts can occur in cats of any age, sex, or breed. A genetic predisposition to inherited cataracts has been observed in Himalayas, Birmans, and British Shorthairs.

What Causes Cataracts In Cats?

There are many possible causes of cataracts. Any type of damage to the lens can result in the formation of a cataract.

Causes of cataracts that have been described in cats include the following:

The most common cause of cataracts in cats is inflammation within the eye, which is often described as uveitis. This can occur as a result of several underlying disease processes. Uveitis can lead the body’s immune system to recognize the lens as a foreign material, contributing to the formation of cataracts.

What Are The Signs Of Cataracts?

In many cats, cataracts are detected early in their development, during a routine physical exam by our [SITEWIDE]LOCATION] vets. These cats may not be showing signs of cataracts at home, because cataracts have not yet progressed to the point that they are affecting the cat’s vision.

It is important to note that not all hazy eyes are caused by cataracts. As cats age, the lens often develops a cloudy appearance due to an aging change known as nuclear sclerosis or lenticular sclerosis.

How Are Cataracts In Cats Treated?

The best treatment for cataracts is surgery. This surgery involves breaking down and removing the cataract (a process known as phacoemulsification), then replacing the lens of the eye with an artificial lens.

If your cat has significant inflammation within the eye, cataract surgery may not be an option. Unfortunately, there are no medications that can dissolve cataracts or slow their progression. This means that cataracts will persist. Fortunately, cataracts are not painful and cats typically adjust well to blindness.

In cats with untreated cataracts, medications such as corticosteroids or non-steroidal anti-inflammatory eye drops are used to decrease the inflammation within the eye. Even though these medications will not affect the actual cataract, it is important to control inflammation to prevent glaucoma (a potential complication of cataracts and inflammation of the eye). Glaucoma does not respond well to medical treatment and often requires the removal of the eye; therefore, medical treatment of feline cataracts is often focused on preventing secondary glaucoma.

If you are concerned about your cat's eyes, please feel free to consult with our Mooresville vets today and get your cat in for an assessment.

What our Clients Say

Lake Norman at Mooresville Animal Hospital is accepting new patients! Our veterinarians are passionate about improving the health of cats, dogs and exotic pets. Book your pet's first appointment today.